Cartoonist of London Times newspaper mocks President Jonathan in a picture that has rapidly become viral. 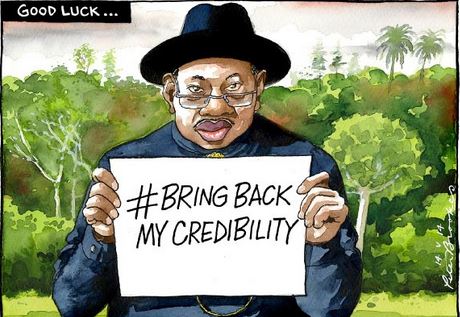 President Jonathan was recently mocked by a cartoonist in a British newspaper, read the report below:

With over 200 girls being abducted by radical Islamist group Boko Haram, the whole world has started paying very close attention to the government of Nigeria, as well as President Goodluck Jonathan.

One of the cartoonists of London Times newspaper, Peter Brookes, has published a cartoon depicting President Jonathan with a new version of a popular hashtag #BringBackOurGirls. In this cartoon the President is holding a sign #Bring Back My Credibility.