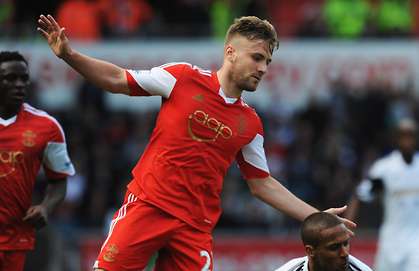 As reported by The Daily Star, Pallister has insisted that Shaw’s relationship with the newly appointed Spurs boss, Mauricio Pochettino, could tempt him
with a move to White Hart Lane in the up coming market.

Shaw, who is just 18-years-old, is set to star at this summer’s World Cup, and has been linked to the likes of Manchester United and Chelsea in recent
time.

Reports have indicated that Manchester United have offered the teenager as much as £140,000-a-week in order to arrive at Old Trafford this summer, however Pallister believes the Red Devils could still face difficulty in landing him.

Speaking to talkSPORT, the ex-Manchester United man said: “He [Pochettino] has that relationship with
him already.

“I heard Shaw saying how delighted he was to play for him and what he has done for his game.

“It could be a spanner in the works for United, who were said to be close to doing a deal for Shaw.

It remains to be seen as to whether Tottenham make a move for the England international in the near future, with Manchester United fans hoping the club
can tie up a deal for the starlet in the coming weeks.

It’s certainly expected to be a busy summer at Old Trafford and White Hart Lane, with both clubs entering a new era under new management.{GMS}