Home National News Odd News Man Burns Girlfriend To Death After She Leaves Him For His Own...
Facebook
Twitter
WhatsApp 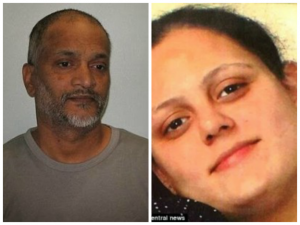 A jealous father-of-twelve who burned his 24-year-old lover to death when she tried to leave him for his 18-year-old son has been jailed for life.

Ashley Williams, 49, hit Julie Beattie, 24, over the head with a hammer before he doused her in a mixture of petrol and diesel fuel.

She managed to stagger out of her home in flames like a ‘zombie’ and gasp: ‘Ashley did this to me’, before collapsing. She later died of horrific injuries.

Two children aged four and five witnessed the murder and became the youngest witnesses to give evidence at a murder trial.

Her sister Lucie Beattie described arriving at their south London home to see Williams put on his coat and walk out as Ms Beattie burned, screaming, behind him.

He carried out the attack in revenge because the mother of his four children was packing her bags to live with his son Ashley jnr from a previous marriage.

He claimed that he had thought he was involved in a ‘water fight’ and that she had been throwing the fuel at him – but he had no idea how she actually became ignited.

But he was convicted of murder at the Old Bailey by a jury of six men and six women.

He showed no emotion as the verdict was announced while the victim’s family wept and clutched each other’s hands.

He was jailed for life and told he must serve minimum of 25 years before being considered for release.

Williams was married to Monica Williams and the couple had eight children together before they divorced in 1999. He then started a relationship with Linda Beattie, the victim’s mother, before he moved on to Julie.

Ms Beattie was aged only 16 when she gave birth to their first child in 2009. The court heard that Williams became increasingly possessive and would not let his partner have a tattoo or wear revealing clothes.

Ashley Jnr, 18, moved into the flat in Walworth, in September 2012 and began a sexual relationship with his father’s girlfriend four or five months later, it was said.
When Williams found out, he banned his son from having anything to do with Ms Beattie and tried to exile him from London. He threatened to ‘break every bone in his body’ if he refused to leave town.

On July 18 Ms Beattie and Ashley Jnr travelled to Birmingham together.