Angela Omieh, a fake female soldier, has been nabbed by the 323 Artillery Brigade of the Nigerian Army, Akure, Ondo State. 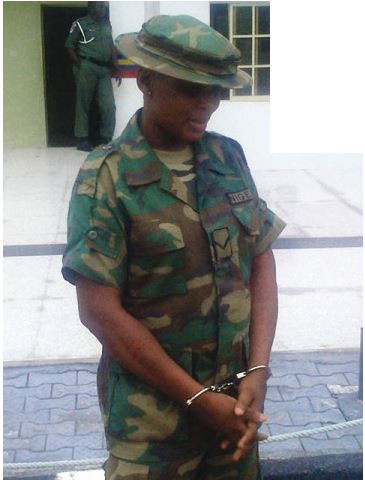 The suspect was said to have been parading herself as a soldier attached to the 149 Battalion but deployed to Joint Task Force, Warri for duty.

She was arrested after her boyfriend, Mr. Collins Jegede ratted her out to security agents.

According to Jegede, he met Angela on a social network and she was photographed in military outfit. She paid him a visit in January 2014 and she also appeared in military attire. He then reciprocated her visit but was surprised that she lodged him in a hotel at the Ijaiye area of Lagos State instead of 149 Battalion, Ojo Military Barracks, where she had claimed to be working.

As a result of this, he suspected she was a fake soldier and reported her to the officer-in-charge of a military checkpoint at Owo.

Found in her possession were, two pairs of camouflage, camouflage T-shirt and short, one pair of desert boot, one jungle hat, police extract and a sworn affidavit for loss of her military identity and three handsets.

Upon interrogation, Angela admitted she was fake and the camouflage was just a means to make ends meet.

“I bought the uniform from Army depot in Zaria. I attended the Nigerian Army depot in Zaria, Kaduna State. I could not continue my education when my father died, so I decided to buy the kits to help me travel to Cotonou, Benin Republic for business with ease,” Angela said.

The Public Relations Officer of the brigade, Captain Ademola Adegoke confirmed the incident.