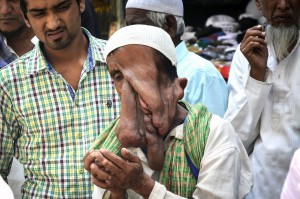 A man known as the ‘melted man’ of India has turned down reconstructive surgery to remove a huge growth on his face so he can keep begging to pay for his beloved daughter’s wedding.

Mannan Mondal, 50, of New Delhi, refused the radical surgery because he relies on his appearance to make a living.

He suffers from neurofibromatosis, a a genetic condition which causes tumours to grow along his nerves, and has caused the severe deformities to his face, but the growths are not cancerous or painful.

Mondal travels to holy sites around India, relying on his shocking appearance to make a living. He has begged on the streets for most of his life and takes home the equivalent of around £5 a day.

He was born with severe deformities, and is missing an eye socket, an ear and most of his teeth. But despite his appearance, he found love at 18 and has four children.

Indian surgeons offered him the hope of a new face, but he turned down the radical operation so he can continue saving to fund his 20-year-old daughter Rasheeda’s special day.