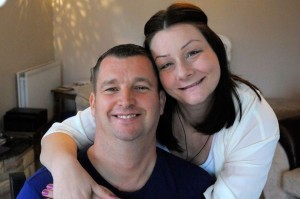 He was left unconscious with a severe brain injury, broken ribs, collapsed lungs and a shattered spine.

His family and girlfriend were told he wasn’t going to make it.

But on waking up from a 10-day coma and seeing his girlfriend, Stewart Fryett said: “I don’t know who you are, I don’t know your name – but I know I love you.”

Stewart, 39, and Chrissie Fryett, 32, are now married, living in Fairfield, Stockton, and expecting their first child in July this year.

But it has taken five years of painful recovery and legal battles for the couple to finally begin enjoying life.

It was on June 13 2009 that the dad-of-five was at a family barbecue at the house of then girlfriend, Chrissie.

“I was at Chrissie’s house with her stepfather and mum and a family friend, Ian, had come round to see us.”

Just 200 yards down the road, Ian lost control of his car and collided with a BMW as it turned a corner on Beckfields Avenue in Ingleby Barwick, near Middlesborough.

Ian got out and immediately called the emergency services while Jason, unable to open the damaged passenger door, climbed into the driver’s seat and out of the driver side door.

Stewart, however had suffered a severe brain injury and was trapped in the back seat, unconscious.

Chrissie said: “We got a phone call from Ian saying they had been in an accident, we thought he was joking because they had only been gone a few minutes.”

The 72-year-old driver of the other car involved was also taken to hospital suffering from chest and neck pains.

Chrissie said: “He was in a coma for 10 days. We were all told he wasn’t going to make it.

“When he came round he couldn’t lift his head up and he just talked gobbledygook.

He was finally discharged from hospital on September 23, 2009 but was severely disabled and required a high level of care and assistance which was provided by friends and family.

Stewart gradually recovered over the next four years and married Chrissie in September 2013 and she is currently expecting their first child in July.