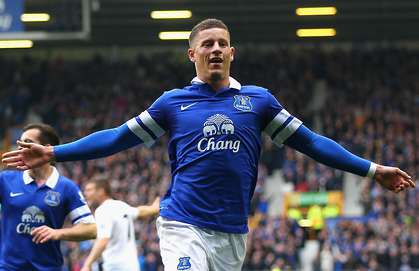 Manchester United could use Danny Welbeck as bait to land Everton midfielder Ross Barkley this summer, according to Goal.com.

Welbeck has been linked with a move away from Old Trafford in recent time
, and now it appears that the club are ready to let the forward depart this summer.

And with Everton linked for the player’s signature, it appears that Manchester United boss Louis van Gaal could look to bring youngster Ross Barkley to the
club.

Barkley, who is set to star for England at this summer’s World Cup, is one of the leading young talents in the Premier League, and has attracted many admirers in recent time.

Reports last month suggested that Liverpool were ready to make a shock £38 million move for the 20-year-old, however it now appears that Manchester United could make their move in the
race to sign him.

Manchester United are certainly in need of additions in the midfield department, after the likes of Michael Carrick, Marouane Fellaini and Tom Cleverley all
struggled for form and consistency last season.

And the addition of Barkley would certainly represent a fine signing for Louis van Gaal, as he looks set to take the club into a new era in the 2014/15
campaign.{GMS}