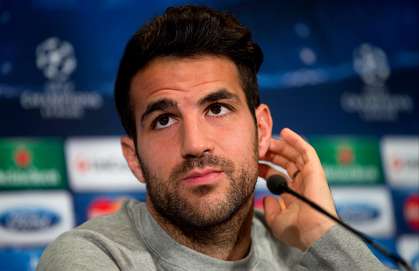 Manchester United appear to be favourites to sign Barcelona midfielder Cesc Fabregas, at least with the bookmakers anyway.

According to the latest transfer odds from SkyBet, the Red Devils are now listed as evens to sign the Spaniard before the summer transfer deadline, with Arsenal – Fabregas’ former club – having drifted out to 12/1.

Manchester City are also at 12/1, with Chelsea’s chances of completing a deal obviously considered slightly more unlikely at 16/1.

Next on the list of possible destinations is Liverpool at 20/1, while the quartet of Tottenham, Real Madrid, Atletico Madrid and Juventus are all priced at 25/1.

Fabregas’ future at Barcelona appears to have been subject to considerable doubt for some time now, with rumours suggesting that the Catalan giants were prepared to listen to offers for his services this summer.

Although he is yet to be formally appointed as Manchester United’s new permanent manager, Louis van Gaal is widely expected to take the reins at Old
Trafford this week and you have to assume that the Dutchman’s impressive track record and considerable reputation in the game will make it far easier for the club to attract a higher-caliber of
transfer target.

Central midfield is also a particular area of the current Manchester United squad that will require immediate attention from Van Gaal, with the likes of Tom Cleverley and Michael Carrick having performed poorly throughout a turbulent 2013/14 campaign under David Moyes.

Fabregas – who is rated at around the £45 million mark – would be an expensive purchase, but one that
would surely help elevate Manchester United back into title contention(GMS)