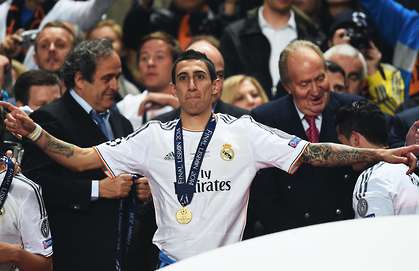 This information comes courtesy of Spanish newspaper Marca, who suggest that Paris Saint- Germain, Monaco, Manchester City, Arsenal and Juventus are also in the running for the Argentine
international and that the bidding war for his services could see offers soar as high as €50 million.

The same source reports that Real Madrid boss Carlo Ancelotti – along with a number of the club’s top- performing stars – do not want to lose Di Maria, who
was arguably the club’s best player during their thrilling 4-1 Champions League final win over cross- city rivals Atletico on Lisbon on Saturday night.

If Manchester United were indeed successful in their attempts to entice Di Maria to Old Trafford this summer, it would surely have to be considered a
major coup for both the club and new manager Louis van Gaal.

After a truly dismal 2013/14 campaign, Manchester United are looking to return to prominence under the reputable Dutchman and subsequently erase all
memories of David Moyes’ shocking spell in charge.

While many fans are obviously expecting Van Gaal – who will guide his native Netherlands to the World Cup this summer before officially moving to the
Premier League – to energise a struggling squad ready for another title challenge, expectations for new signings appear to vary wildly with Manchester
United missing it out on Champions League qualification for the first time in almost two decades.

Di Maria – who will also head to the World Cup in Brazil as a member of Alejandro Sabella’s Argentina squad – would certainly prove a tremendous improvement on Van Gaal’s current midfield options, but it appears Manchester United face a wealth of
competition for his signature.{GMS}