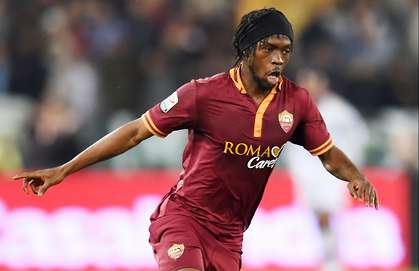 Manchester United are ready to offer
£16million for ex-Arsenal flop Gervinho,
according to sensational reports in the
Express.

The Ivorian was sold by Arsene Wenger to Roma in 2013 after failing to impact positively in the first- team, but since then the 26-year-old has replenished
his reputation in the Serie A, and was a key part of Rudi Garcia’s impressive Roma side this campaign .

However sources in France state that Gervinho is insistent on a higher wage, and may be primed for a shock exit in search of more money as his club aren’t
prepared to consent to his demands.

The Express claims that Louis van Gaal is prepared to take full advantage of the ensuing complications between the winger and the powers that be at the
Stadio Olimpico, and could well bring the player in as his one of his first additions to the new-look United side he is trying to create.

Whether or not Red Devils fans agree with Van Gaal’s stance very much remains to be seen, as they will be wary of placing their faith in a man who so famously flopped when he was given his last crack at English football.

Nevertheless it would appear that their new Dutch boss is considering the possibility of activating Gervinho’s £16m buy-out clause, and could perhaps use him as a replacement for Nani on the wing.{GMS}