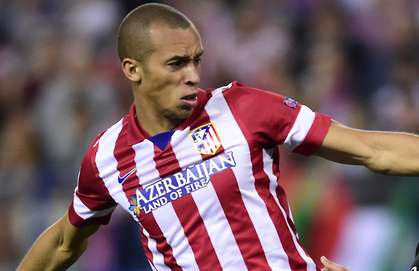 Manchester United are poised to sign Atletico Madrid defender Miranda after agreeing a €30m fee with the La Liga champions for the 29-year-old Brazil international.

This information comes courtesy of Spanish newspaper AS, who claim that the Red Devils have all but signed the South American who has even started the hunt for a school in the city for his children to attend.

Miranda, who has been capped seven times by Brazil, was one of La Liga’s standout defenders this season alongside the equally impressive Diego Godin.

The centre-back duo – along with full-backs Juanfran and Filipe Luis, plus formidable goalkeeper Thibaut Courtois – comprised the meanest defence in the
Spanish top-flight this term, conceding just 26 goals in 38 matches.

But it seems United have won the battle with Barcelona to sign Miranda, who is set to become one of Louis van Gaal’s first signings, after triggering the
player’s release clause. He will be expected to fill the huge void left by Nemanja Vidic and Rio Ferdinand, who both departed Old Trafford this summer, and pass his experience on to the likes of Chris Smalling and Phil Jones.

Meanwhile, it’s reported that Atletico may look to replace Miranda with Manchester United and City target Eliaquim Mangala from FC Porto. However, it would take a huge transfer fee for Atleti to bring the France international to the Vicente Calderon this
summer.{GMS}