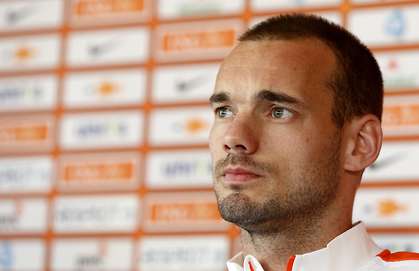 Sneijder was included in the Netherlands’ provisional World Cup squad by current coach Van Gaal, who has shown an interest in making the 29-year-old part of his new-look Manchester United team following news that Galatasaray are looking to cash in on the
attacking midfielder.

Chelsea are also interested in signing Sneijder, who enjoyed a fantastic working relationship with Jose Mourinho
during their time together at Inter Milan.

The Dutchman left the San Siro to sign a lucrative contract with the Turkish giants in January 2013 – but although he has no desire to return to Serie A, he would be open to joining a top English club, according to the Daily Star.

Galatasaray president Unai Aysal confirmed last month that Sneijder would be granted permission to leave the Turk Telekom Arena if they receive a bid which meets their valuation of the player.

“If Chelsea were to offer a deal worth over €15 million (£12.5m) I would give Sneijder permission to leave if that’s what he wanted,” Aysal told reporters.

Sneijder, who was the star of the show at the 2010 World Cup finals in South Africa, has struggled to produce his best form in Turkey – but, if he does secure a move to United or Chelsea this summer, he will leave the country having scored 21 goals in 58 appearances – and with Turkish Super Lig, Turkish Super Cup and Turkish Cup winners’ medals to his
name.{GMS}

Would Sneijder be a better signing for Manchester United or Chelsea? Have your say In the comments section below.