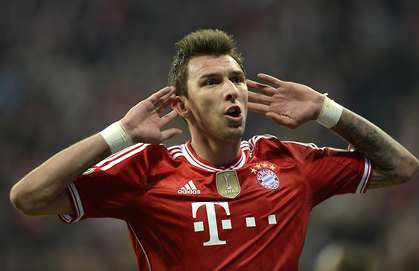 Mario Mandzukic has cleared his locker at Bayern Munich as he prepares to leave the club this summer, reports the Daily Mirror.

The Croatian international was left out of Pep Guardiola’s squad for the German Cup final last weekend in what was the clearest sign yet that he will be leaving the Allianz Arena.

Mandzukic has been a key part of the Bayern Munich squad this season, scoring 26 goals across all competitions but a series of clashes with Guardiola
seem to have to him on the periphery of the manager’s long-term plans.

The news comes as Arsenal head into
the summer determined to reinforce their forward line. Arsene Wenger has relied heavily upon Olivier Giroud this
season and is looking to add a world-class alternative in order to power the Gunners to a genuine title challenge next term.

Mandzukic was reported to be one of Wenger’s main targets with Karim Benzema representing a potential alternative.

It is wise for Wenger to highlight alternatives as he is not the only Premier League manager chasing the Bundesliga top scorer.

Louis van Gaal has reportedly set his sights on Mandzukic as he prepares to take charge of Manchester United after Holland’s World Cup campaign finishes.

Chelsea’s Jose Mourinho is also in the hunt for the 27-year-old as he looks to make wholesale changes to his forward line.

Mourinho has already said he is happy to keep Fernando Torres at the club, but he is still willing to listen to offers while Demba Ba and Samuel Eto’o are
also expected to leave.

Diego Costa is due to arrive from Atletico Madrid but Mourinho wants to use Roman Abramovich’s deep pockets to secure another top striker in the form of
Mandzukic.

The Special One was reportedly ready to give up as much as £57m to make sure both strikers are plying their trade at Stamford Bridge next season, seemingly giving him the edge over Wenger.

Wenger has already stated that he believes it will be hard to sign players before the World Cup, while Mourinho seems intent on getting the bulk of his
business done before the tournament starts.{GMS}