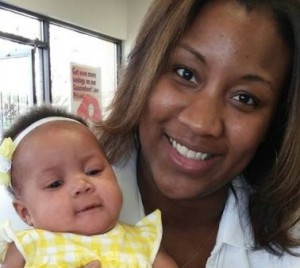 Alabama investigators responded to a 911 call at a Huntsville home on Saturday around 10:45 p.m. Once they arrived on the scene, they discovered Natasha and the child, who had suffered from apparent stab wounds. Authorities say that the disturbed mother purchased a knife from a local Walmart and injured the infant at another location before transporting her to the Neptune Drive home. It’s unclear what led up to the stabbing, but it’s believed that the 31-year-old mother had plans to kill the child and then herself.

After police arrived on the scene of the crime, the baby was taken to a nearby hospital in Birmingham in critical condition. Her mother was sent to the Metro Jail. She is being held without bond.

“There was over 30-40 police cars out there,” said Promise Shorter, who revealed that the Neptune Drive home actually belongs to a relative of Natasha. “If anybody had pulled through, you would have thought all hell would have broke through on this street.”

“Everybody thought she was beautiful and intelligent and came from a good home,” said Shorter. “The community needs to pray for them.”

As previously mentioned, Natasha has been charged with attempted murder. Our prayers go out to the child and family affected by this terrible tragedy. While we can’t say what led this woman to feel she had to resort to such measures the day before Mother’s Day, hopefully she is somehow able to get the help she needs.