Critics of the Obama administration have responded to the First Lady’s support of the #BringBackOurGirls campaign with one of their own.

Last week the First Lady shared a photo on Twitter showing her support for the campaign to raise awareness about the plight of the Nigerian schoolgirls kidnapped by terrorist group Boko Haram.

She also discussed the campaign while filling in for her husband on the President’s traditional weekly address. 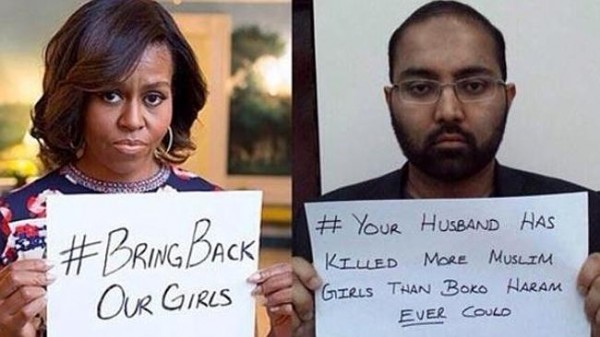 No data on total US drone strike casualties has been collected, but reports in the past week have included six deaths in Yemen and three deaths in Pakistan.

In the new campaign, one unidentified man holds a sign that reads “Your husband has killed more Muslim girls than Boko Haram ever could.”

“Bring back your drones,” reads the sign of another campaign participant.

Activists have targeted other figures who have shown support for the #BringBackOurGirls campaign, including British Prime Minister David Cameron. []