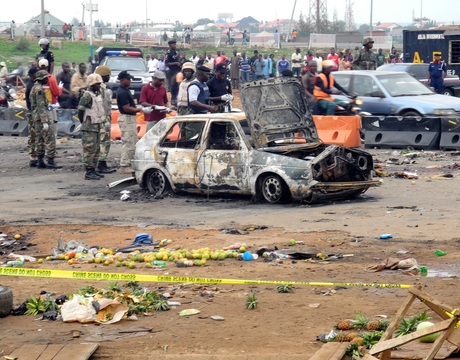 Three unexploded improvised explosive devices, IEDs, at the scene of the May 1 explosion in Nyanya, Abuja, have been safely disabled by men of the anti-bomb squad, the Nigeria Police confirmed on Friday.

The explosion on Thursday night close to the scene of last month’s deadly attacks, left at least 19 persons dead with about 60 others sustaining injuries.

Briefing journalists on Friday at a news conference in Nyanya, the scene of the latest terrorist attack, the Police Public Relations Officer at the Force Headquarters, Abuja, Frank Mba, said the IEDs had been rendered safe.

The spokesperson of the Department of State Security, SSS, Marilyn Ogar, and an official of the National Emergency Management Agency, NEMA, attended the briefing.

Mr. Mba said that six others, apart from the 60 injured had been treated and discharged.

“Investigations are ongoing and we appeal to the citizens to rally round the security forces at this critical point in our history.

“It will take the unity of all of us to defeat terror”, Mr. Mba said, and declined further comment on whether any arrest had been made.

Speaking in the same vein, Ms Ogar solicited the cooperation of all Nigerians to win the war against terrorism.

“We must take our security into our hands because the security agencies cannot do it all alone, it must be collective.

“The call here is for all Nigerians to rally round security agencies; it is not a time to say they are not doing what they are supposed to do.

“The number of security personnel in the country is very small compared to the population, rally round us through information, no information is useless”, Ms. Ogar appealed.