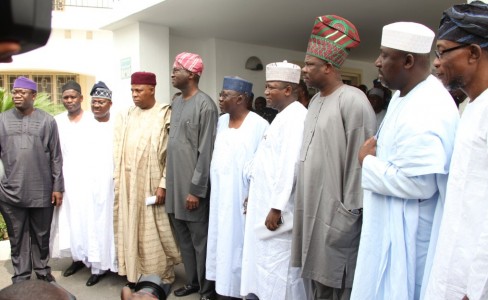 Governors of the All Progressives Congress, APC, have expressed concern over incessant killings of Nigerians by Boko Haram insurgents.

The governors, who made this known in a statement signed by Imo State governor and chairman of Progressive Governors Forum, Rochas Okorocha, said they were disturbed about the growing state of insecurity and the volatile nature of bus parks across the nation that seem to have become an attraction for the insurgents’ mass murder tactics.

The APC governors further dismissed the insurgents as blood thirsty group with no real purpose and no clear target.

The statement reads in part “Our heart and prayers go out to families affected by yet another senseless attack on innocent citizens.

“In just 17 days after the first bombing at Nyanya, Abuja that left over seventy people dead, and hundreds still battling to recover from their injuries, another bomb has gone off again, on a day that was meant to be peaceful.

“The ceaseless attacks have gone beyond keeping count of the number; there can be no justification for such wanton waste of lives and property that has no real purpose and no clear target. “The current state of affairs has left many citizens hopeless and wondering where the next target may be. “Never in the life time of this country have there been such incessant killings. However, we refused to be cowed by the antics of terrorists and their nebulous agenda.

“Government must provide genuine leadership, while the finger-pointing must stop. It is unhelpful for anyone to point the finger of blame every time there is a disaster – which is now very often. Government at all tiers must come together to assure Nigerians that we care for their security and are determined to do everything in our power to secure their lives and property.

“It is not a one-man task. As Progressive Governors, it is our view that the security challenges confronting Nigeria calls for unorthodox tactics. We demand that the on-going National Conference should now be devoted to discussing and finding solutions to our security challenges.

“May I, therefore, on behalf of the Progressive Governors Forum, restate our commitment to setup a Trust Fund in support of victims of terror. My colleagues and I will make our contributions to the fund known in due course”.