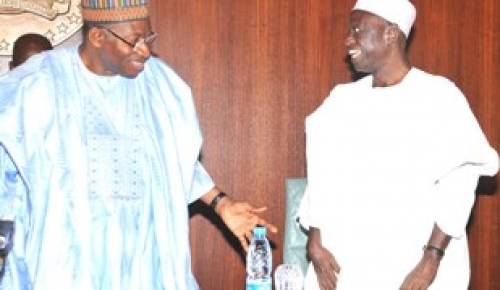 A group of elders from the North-East have told President Goodluck Jonathan in no uncertain terms that his wife, Dame Patience and some highly-placed government officials were treating the case of the missing Chibok schoolgirls with disdain and callousness.

The elders under the aegis of North-East Forum for Unity and Development (NEFUD), made their position known during a visit to the president Tuesday.

The delegation was led to State House by the Forum’s Board of Trustees chairman, former Minister of Finance, Malam Adamu Ciroma.

However, a copy of Ciroma’s speech, which was read during the visit and obtained by Daily Trust, indicated that the elders accused government officials of neglecting and trivialising the insurgency ravaging parts of the North.

The visit came on the heels of the inauguration of a committee constituted by President Jonathan to assist in the search and rescue of over 200 school girls of Government Secondary School Chibok, Borno State, who were abducted by Boko Haram insurgents.

“The abduction of the over 230 Chibok schoolgirls and the way this dastardly appalling act is being handled with callousness and disdain by some highly placed officials of the Federal Government, the ruling party and even the wife of the President is a matter of surprise and worry to the generality of Nigerians”, the North-East elders told Jonathan.

“One begins to wonder how this real tragedy has been perceived with high degree of official doubt and ambivalence that it is taking the Federal Government over three weeks to set up a committee to authenticate this”.

The elders’ criticism of the president’s wife stemmed from her comments Sunday night in which she emphatically denied that any of the school girls were missing and accused the Borno State government of complicity in sinister plots to embarrass the presidency and make her a widow.

In his speech, Ciroma further said, “This insurgency, we believe, is not about religion, ethnicity or politics, but an extension of international terrorism on our fatherland which has concomitant negative effect on our national, regional and global economic survival and performance”.

He stated the Forum’s appreciation and endorsement of “all the positive efforts and contributions made by the different groups and individuals in addressing the insurgency and its fall-outs bedeviling the region, more so those that are tabled before the government….

“Despite the various efforts appreciated and endorsed above, NEFUD is worried by the escalation in the wide ranging attacks, kidnappings, abductions, mass killings on the one hand, and the seeming neglect, trivialisation and the down-playing of the problem by those who are constitutionally charged to solve the problems and quickly too, in the first place. We should not allow the situation to be misconstrued as a case of retributive justice against the people of the North East and the North in general”.

The forum made nine recommendations to the President, namely:
1.    Government to re-examine its capacity to tackle this tricky and deteriorating security situation by recognizing it correctly for what it is.
2.    Government to drop the idea of renewing the state of emergency in Adamawa, Borno and Yobe States and to put in place more efficient and stringent security measures, effective intelligence gathering and analysis, and the introduction of high-technologies in nipping the crisis in the bud Meanwhile, the reports of the following should now be seriously studied and implemented as soon as possible:
i.    The Gaji Galtamari Committee;
ii.   The Sheik Ahmed Lemu Committee; and
iii.  The Alhaji Kabir Turaki Dialogue & Reconciliation Committee
3.    Government to ensure robust community relations and participation in the security, rescue and rehabilitation operations in the area.
4.    Government to ensure that the abducted Chibok School Girls are quickly and safely rescued, rehabilitated and re-united with their families within a pre-determined timeframe.
5.    In order to raise the confidence and morale of the citizens, the President should lead a high-powered delegation of his Cabinet and security operatives and visit Chibok/Izge, Buni Yadi, Bama and Gamboru Ngala as soon as possible (immediately) in the manner that he (you) visited Nyanya. He should make strong positive statements there with regards to the rescue operations and Government’s plans for rehabilitation/compensation and re-integration.
6.    The Government to genuinely investigate all cases of human rights abuses, extra-judicial killings, tortures, slippages/escapes from detention etc and bring the culprits to justice.
7.    The Federal Government to consider and assist the State Governments strongly in the immediate rehabilitation and securing of the affected schools, colleges and critical infrastructure in the area, so that our children will safely and confidently go back to school.
8.    The States Governments in the sub-region particularly the three States under the Emergency to be offered some respectable and reasonable monetary compensation to off-set their expenditure on security operations which is primarily a Federal Preserve.
9.    While acknowledging the constitution and the reconvening of the Governments Continuing Dialogue Committee, we urged the government and the committee to seek and utilize various civic and civil ways to achieve comprehensive solution to the insurgency. This can be achieved by resorting to notary stakeholders, traditional institutions, faith/community based organizations and the Civil Society to provide local intelligence and other necessary information without the risk of reprisal by the insurgents who apparently get tipped-off by the rogue elements in the security agencies.
“In conclusion, Mr. President, we wish, on behalf of the entire people of the North East sub-region, to passionately appeal that this submission be given urgent and serious consideration required to reverse the current unsustainable situation. Our people yearn for and deserve to enjoy the dividends of democracy such as security and freedom of movement, to live in dignity and pursue their economic and social well-being”, the elders said.