Over 200 GGSS Chibok female students remain missing for 23 days, which makes this case unprecedented. A suspected conspiracy theory has been just assumed by the Northern Nigeria chapter of the Christian Association of Nigeria (CAN). 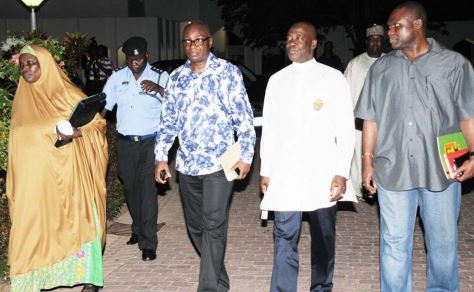 According to a statement issued by its Secretary-General, Prof Daniel Babayi, and the Public Relations Officer, Sunday Oibe, on May 7, 2014, Wednesday, the Governor of Borno State, Kashim Shettima, as well as the Commissioner for Education, GGSS Chibok Principal and the Chief Security Officer (CSO), may be hiding something.

For instance, the statement emphasised that neither the daughters of the teachers nor of the Principal were abducted.

The ‘fundamental’ six questions which required urgent answers are:

1. Has Governor Shettima constituted any panel of investigation with a view to making its report public?

2. How did the 353 female students disappear from the school into the thin air?

3. Why did the Borno State Commissioner for Education, Principal, Vice Principal and the CSO, all Muslims,ignore the valuable advice of WAEC on the security measures?

4. How did Boko Haram carry over 200 students and their food stolen by these criminals from the school? Was it carried with trailer?

5. Why no single photograph of the abducted children was made public by the school authorities?

6. Where were the daughters of the Principal, Vice Principal and the CSO Chief when the abduction took place?

CAN prayed that the current situation was not a “political gimmick” to carry out a political conspiracy against the young girls, the future mothers and “leaders of tomorrow”.

“What we are after is the safety and future of these children, whether they are Christians or Muslims or our enemies doesn’t matter. They are Nigerians, first and foremost,” the statement pointed out.

It would be noted that the Northern States Christian and Elders Forum, an affiliate of CAN, over the weekendrevealed a list containing 178 names of the missing GGSS Chibok female students, out of them 163 Christian girls, and only 15 Muslim girls.

The leader of Boko Haram sect, Abubakar Shekau, claimed responsibility for the abductions in a fresh video, released on May 5, 2014, Monday, threatened to “sell the girls in the market” because they have become his “slaves and property”.