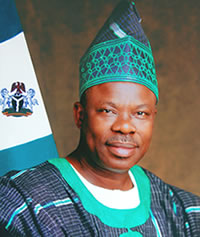 A chieftain of the All Progressives Congress, APC, in Ogun State, Remi Bakare has said that the alleged planned defection of the state governor, Senator Ibikunle Amosun to another party would not affect the fortunes of the ruling party in the state.

Bakare, who stepped down for Amosun in the last governorship election on the platform of the defunct Action Congress of Nigeria, ACN, said party leaders were regretting the decision to field Amosun as the party’s flag bearer in the 2011 polls.

The crisis in Ogun APC got messier on Thursday as a former governor of the state and national leader of the party, Aremo Olusegun Osoba closed the door on reconciling with Gov. Amosun or working with his faction of the party in the state.

Osoba, while addressing his loyalists at a stakeholders’ meeting held at his residence at Ibara GRA, Abeokuta, said: “I now give you my words; I pledge in the name of God and Jesus Christ who I worship that we have gone beyond anybody begging us. If thousands come prostrating before me, what you members have decided is what I will adhere to and do”.

Berating Amosun for stoking the flame of discord in the party, Bakare, who spoke with reporters on Friday in Abeokuta, described the governor as a stranger in the progressives party, acussing him of jettisoning the party manifesto.

According to Bakare, who described himself as the better alternative to Amosun, “let me tell you that there would probably not have been opposition in Ogun State if those strangers had not destroyed APC”.

He continued: “The truth is that, almost everybody in Ogun State seems  to have just one common goal and you will be shocked that if today, those strangers decide to leave I can tell you almost four or five times number that had left the party will come back to APC.

“Whether we call it crisis or not, the truth is that we have a stranger in the house and I see the stranger taking leave of the house very soon when the heat is on, the heat is on already, but, when it is unbearable, the stranger will probably relocate and we will take things from there”.

While speaking on the performance of Amosun in the last three years, Bakare, whose governorship posters have flooded the state capital, said, “yes, there have been massive spending on roads, but, ask yourself what is the volume of  vehicular traffic in Ogun State that justified such that massive construction?

“It is like a case of misplaced priority. When we were in Secondary School, in basic Economics, there is something we call scarcity, choice and scales of preference. Is that what we really need in Ogun State? Why embark on massive road construction at the expense of education? At the expense of Health? I don’t think that is the priority, so, he must have his own reason for choosing that as his own priority but that is not what people need”, Bakare stressed.

He added that “The cost of constructing one road will employ 10, 000 people in the Civil Service and pay them for 10 years. So, there are better things we can deploy our resources on and this will be the first government I have seen whereby you have massive spending going on and not yet impacting on the economy of the state.
“Let me say  this, the opposition within the party is even stronger than the  one outside, the fact remains, he is an outsider and he is not implementing the manifesto in the party that elected him, rather, he is  doing what he wants not the party manifesto”, Bakare fumed.