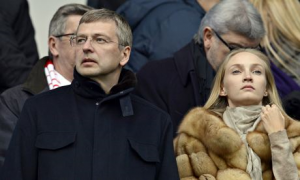 Chineke!!!!!!!!! They say the heart of man is wicked, but i guess the saying also includes women……hehe

The Owner of Monaco football club Dmitry Rybolovlev who is going through a divorce from his wife of 24years Elena Rybolovlev has been ordered by Judges in Switzerland to settle his ex-wife with a whooping sum of 4.5 billion Swiss francs and 20 centimes, which is over 2.6 billion pounds for a divorce settlement.

This follows a six-year legal tale in which Mr Rybolovlev, who made his billions through a successful fertilizer business, resentfully contested Ms Rybolovlev’s claims to two of the most expensive properties in the USA and a £100 million Greek island.

Mr. Rybolovlev must sign a cheque for the ear tingling sum in the Swiss city of Geneva, where Ms. Rybolovlev lives in a lakeside mansion.