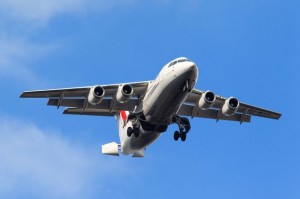 The CityJet airliner was heading for Florence from London City Airport this morning having left at 7.25am when a section of the wing detached and became loose.

Passengers said they heard a loud bang and looked out the window to see part of the plane hanging off.

Telegraph journalist Cole Moreton was on board the plane.

He said: “On take off there was a strange noise then a bang and six-foot plus section of the left wing that looked like suddenly came loose and hung down, flapping in the jetstream.

“It seemed hydraulic pistons had snapped as they were flapping too. Passengers were alarmed and told the cabin staff, who appeared to inform the captain.”

The Avro RJ85 jet circled the Thames estuary before meeting emergency services when it returned at the airport.

All 61 passengers on the jet returned unharmed.

A CityJet spokesman said: “The WX 281 flight had just taken off from London City Airport on its way to Florence when the cover of the operating mechanism on the wing became partially detached.

“The crew followed their standard procedures and, after a discussion with CityJet Maintenance Control, decided to return to London City Airport.

“Air Traffic Control were notified and the aircraft returned making a normal approach and landing. Passengers are being re-directed on another aircraft and will depart with a two hour delay.”