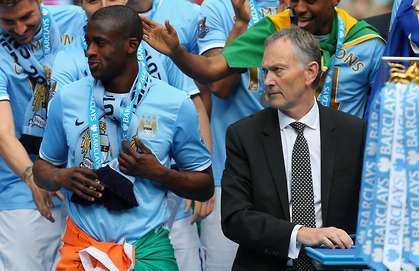 Former Manchester United midfielder Paul Scholes has hit out at Yaya Toure over his outburst regarding the perceived sleight from Manchester City on his 31st birthday.

Toure appears to be angling for a move away from the Etihad Stadium after his agent revealed earlier this month that the Ivorian was unhappy with the lack of gratitude shown to him by Manchester City bigwigs on his birthday.

The powerhouse also fuelled speculation about his future by admitting that it would be an ‘honour’ to play for Paris Saint-Germain, having promised to
speak out about his future after the World Cup this summer.

Scholes, who hung up his boots at Manchester United last year, says the Manchester City man is likely to regret the entire episode in the near future.

“As for Yaya Toure sulking because Manchester City didn’t mark his birthday with sufficient respect, it was comical,” he wrote in his Paddy Power blog.

“Quite embarrassing, really. I can’t remember Manchester United players acting like this. We still came back for pre-season. Poor Yaya, maybe the big
lad just needs a cuddle.”

Toure has been an inspiration at Manchester City since joining from Barcelona in 2010, helping the club win the Premier League twice, along with the FA Cup and the League Cup.

Along with his PSG admission, he also said he would like a move back to the Nou Camp before he retires. “Yes, I have said I would like to finish my career at
Barcelona,” Toure told reporters. “You never know because football moves quickly, you never know.” Meanwhile Scholes had some wise words for England ahead of the World Cup – telling them they should play like Manchester United’s fiercest rivals, Liverpool.

The Reds enjoyed a successful campaign but fell just short of their first Premier League title, and Scholes says the Three Lions should start their first match with a core of players from Anfield.

He said: “For England’s first XI, we’ll know more after the upcoming friendlies, but on the back of last season, I’d definitely start with Steven Gerrard,
Daniel Sturridge, Jordan Henderson and Raheem Sterling. The question mark is Glen Johnson at right back.

“It’s probably Phil Jones’ best position right now, even though Jones could still develop into a great centre half. Johnson is a touch better going forward, but it’s a tight call.”{GMS}