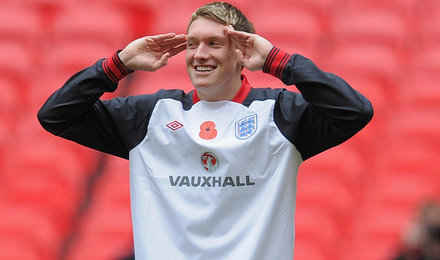 The 22-year-old continues to make good progress in his recovery from a shoulder injury and joined up with other members of the squad for the England Footballers Foundation charity dinner on Sunday night Roy Hodgson’s squad fly out to Portugal on Monday for a five-day training camp ahead of a pre-World Cup
friendly with Peru on May 30 and Jones is adamant that confidence within the squad is high.

“There is a real buzz about what is going to be a fantastic tournament and all the lads are excited about it,” Jones told Sky Sports News.

“We’ll go in there with a great belief and confidence about ourselves. We know that if we play at our best then on any day we can beat any team.

“There’s no point getting on the plane unless we think we are going to go far and who knows – maybe we can win the tournament.

“But we’re all confident and looking forward to the tournament.”

Leighton Baines is expected to start at left-back in England’s World Cup opener against Italy next month, but says nobody has a guaranteed place in the side.

“At this level, in the company you are in, in terms of the players, I think it would be foolish for anyone to think that they’re guaranteed to start a game,” he said.

“I think all the players will want to be
right at it and fight for the place from the get-go.

“The manager’s recent comments that we are not among the favourites to win the competition were right. We’re not, but we’re excited by some of the
players that have been included in the squad.

“That has got a lot of people in the nation a bit more excited about our possibilities, so we’ll go out there with that and hopefully we can do well.”

England captain Steven Gerrard has also insisted there is real belief in the squad that they can do well in Brazil.

Gerrard said: “I think (low expectations) can help but there’s no harm in dreaming. Us players dream as well,
you always say to yourself ‘what if’, ‘what if it does happen’ and you prove all the doubters wrong and you go on to have a successful World Cup?

“So there’s no harm in dreaming but the reality is that there are a lot of top teams going to this World Cup. It’s
a very difficult competition but there’s excitement and belief in the squad they we can do well.

“It’s for real now. It’s not far away and the preparations start (Monday) when we get over to Portugal and do our first training session. There’s certainly a lot of
excitement and belief in the squad.”(SKY)