Both ASUP and COEASU have been on eight-month and six-month strike respectively.

The minister explained at the peace meeting brokered by the House of Representatives on Education between the Federal Government and the striking lecturers of both polytechnics and colleges of education that the modality on how to pay the outstanding N40 billion arrears to both COEASU and ASUP was responsible for the continuation of strike by the two unions.

The House Committee, chaired by Honourable Aminu Suleiman, at the meeting, impressed it on the parties to resolve issues that led to the strike in the interest of the students, who, he said, had been at home for too long as a result of the strike.

But the minister, while briefing the lawmakers on steps taken by the Federal Government in resolving the crises, maintained that “the government is not sleeping.”

“It is nobody’s desire to see schools closed down for almost a year. People should know that what we are trying to do is not personal. Nobody wants children to stay at home. The matter started with the former minister.”

He added that “this matter did not start with me; I inherited it from my predecessor,” saying despite the fact that he took a risk to have the arrears of the striking lecturers to be paid, the ASUP in particular rejected his offer to have the arrears paid in two instalments.

He added that Salaries, Incomes and Wages Commission had written a letter rejecting the proposal he made to ASUP on the payment of the arrears, which, he said, had now compounded the situation.

To this end, the minister said: “We are now in a fix. We are now trying to resolve the issue with the Salaries and Wages Commission,” he said,

ASUP chairman, Dr Chibuzo Asomugha, on his part, said, the “Honourable Minister’s presentation has given me hope that this matter will be resolved.” 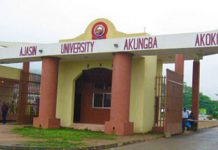