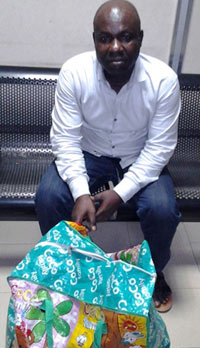 The National Drug Law Enforcement Agency, NDLEA, recorded another success in its war against drug trafficking as its operatives nabbed a 51-year-old-man, who attempted to smuggle 3.870kg of suspected Methamphetamine to Nairobi, Kenya.

The suspect, Odeyemi Ademola Ayodeji, was arrested during the screening of outbound passengers on a Kenyan Airways flight at the Murtala Mohammed International Airport, Lagos.

During interrogation, Ayodeji confessed that had he successfully smuggled out the illegal drug to its destination, he could have been N2.4 million richer, adding that he got himself involved in drug trafficking so as to raise money to clear his debts.

The suspect, who is from Osun State, claimed that his inability to provide for his family led to one of his wives running back to her parents’ home.
According to him, “I am owing people. I couldn’t sleep because of debts.  I have two wives. But the first one left to live with her parents because of my condition.

“I would have made a profit of $15, 000 (N2.4 million) had I succeeded in selling the drug in Nairobi. I intended paying my debts and start a business with the money realised”, Ayodeji disclosed.

Narrating how the suspect was arrested, the NDLEA Commander, Lagos Airport, Hamza Umar, stated that the drug was found inside the luggage of the suspect.

He said: “The drug was packed in a white transparent polythene and hidden inside his bag containing soup ingredients like pepper, melon and crayfish”.

Giving a physical description of the illegal substance, Umar said: “Methamphetamine often called ice or meth is a crystal-like powdered substance that sometimes comes in large rock-like chunks. It is odourless, bitter and dissolves easily in water or alcohol”.