A new report has emerged about the Chibok girls abducted in Borno state on April 14, that President Goodluck Jonathan received a video where the schoolgirls were seen pleading for him to spare their lives, according to UK Telegraph. 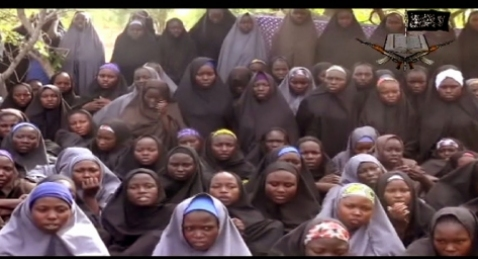 The Boko Haram sects are said to have sent the video to the President by an  intermediary, a Nigerian Journalist, Ahmad Salika in a bid to change the mind of Jonathan concerning his rejection of the original deal to swap the school girls for Boko haram prisoners.

It was yesterday reported that the President changed his mind at the last minute to ‘Swap the girls’ after warnings from Western countries at the security summit in Paris.

Ahmad Salkida who was reported to have told President Goodluck Jonathan that the use of force will not bring back the abducted girls alive from the Insurgent’s den obtained the video as a way of proving to Mr Jonathan’s office that he had authentic lines of communication to Boko Haram’s leaders.

Salkida who left the country two years ago to Dubai for fear of his live after being arrested in the past and associated with the sects as a result of his closeness to them, upon his return back to the country was said to have headed up into the remote bushland areas where the group operate, meeting a senior assistant of Boko Haram’s leader, Abubakar Shekau.

The Federal government still in doubt of Salkida asked for a prove, a source said:

“The government said to the intermediary to prove himself to show whether he was capable of brokering a deal or not, and insisted that he should obtain proof of life of the hostages,” the source said. “So during his talks with the insurgents, he obtained a DVD which had clips of girls being interviewed by members of the group, in which they asked President Jonathan to do a prisoner swap to get them freed.

“That DVD was shown to the government, and a deal was arranged so that the girls would have been released a week ago on Monday, but at last minute the government backed out.”

The Nigerian government aside pressure from Western countries at the security summit in Paris not to accept the Boko haram terrorists demand to ‘Sap the girls’, a source said that they appear to be afraid that “if they do a prisoner swap, they will lose the support of the West.”

The source further said, the negotiations had now “crashed”, with Mr Salkida returning to Dubai while the DVD remains in the possession of the Nigerian government and has not been released publicly.