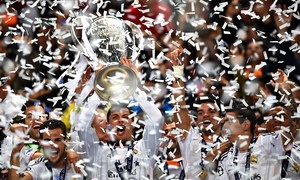 Real Madrid have been ordered to close part of their Bernabéu stadium for one match after the European champions were charged over racist behaviour by
fans during their Champions League semi-final against Bayern Munich in April.

A statement from Uefa said: “Following the charge of racist behaviour by Real Madrid supporters during the match (Article 14 of the Uefa disciplinary
regulations), the control and disciplinary body has ordered the partial closure of the Santiago Bernabéu for one match.

“More specifically, sectors 120 and 122 of the stadium will be closed for the club’s next Uefa competition home game. Real Madrid are obliged to display a banner with the wording ‘No to Racism’ in those sectors.”

Real beat Bayern 1-0 in the first leg on their way to a 10th European Cup crown.
Spanish football has been plagued by racist incidents this season, the most high profile involving Barcelona’s Dani Alves, who took a bite from a banana thrown at him by a Villarreal fan during a La Liga match in April. Villarreal were fined €12,000 (£9,800) by the Spanish Soccer Federation.

The Anti- Violence and Racism in Sport Commission appealed against the perceived leniency of the punishment.
Levante’s Senegalese midfielder Papakouli Diop complained of racist abuse from Atlético Madrid supporters this month and fans of Real Betis
allegedly directed abuse towards one of their own players in November.{Guardian}