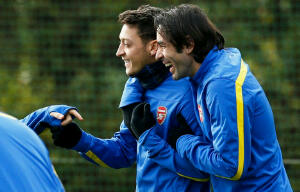 The German, signed from Spanish giants Real Madrid, took only ten minutes to assist a Giroud’s goal in his debut game for Arsenal.

However, it hasn’t been all bright for the midfielder, as he has struggled to settle down to life in England. Still, he’s continued to show determination to succeed, and that has culminated to an Fa Cup final berth.

A feat which the player has continued to dream of a trophy in his maiden season for the gunners.

Pires however, believes Ozil has got the quality and intelligence to settle quickly, and predicts a vibrant second season for the player. He said :

“I like Ozil. He is a very good player, with quality. When you come to England, it is very difficult because the football is completely different.

Robert was also full of praise for his former manager, who subbed him in that memorable 2006 Uefa Champions League final.

“I know Arsene Wenger. Sometimes you need to take your time over a decision. He knows Arsenal, the team, the squad, all the players. He knows he has
very good quality.