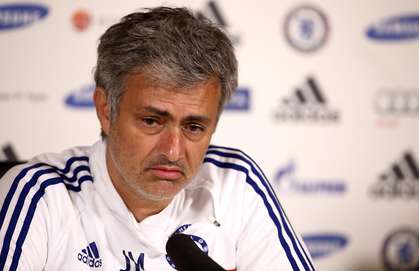 Chelsea owner Roman Abramovich is
questioning whether he made the right choice hiring Jose Mourinho last summer after a poor season at Stamford Bridge.

According to Le 10 Sport, the Russian oligarch is considering the possibility of sacking Mourinho less than a year after the Special One started his second stint in charge of Chelsea.

The Blues have had a poor season by Abramovich’s high standards, winning nothing and finishing third behind Manchester City and Liverpool.

Mourinho has claimed Chelsea’s failing have been down to a lack of strikers, refusing to take the blame for himself.

Meanwhile, Diego Simeone has inspired Atletico Madrid to a famous La Liga title victory and could also win the Champions League on a tiny budget compared to Chelsea’s.

Needless to say, Abramovich sees Simeone as a potential future manager of Chelsea and could even offer him the job this summer if he does decide to
sack Mourinho.

Not only are Chelsea failing to impress on the pitch but Mourinho has also made plenty of enemies off of It.

Chelsea sold Juan Mata to a Premier League rival because Mourinho didn’t. ike his style and a similar situation looks to be developing with Eden Hazard.

PSG are reportedly keeping a close eye on the situation as they would be keen to offer Mourinho the Job at Parc des Princes should he find himself
unemployed.{GMS}