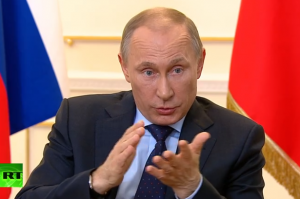 We’ve all had a ticking off in our time for the odd naughty word, but cussing in Russia from now on could hit you in the wallet, thanks to a new law from President Vladimir Putin.

Under the legislation, signed off on Monday, offenders will face fines of as much as 50,000 roubles (£829) for an organisation, while individuals will have to pay up to 2,500 (£41) if they let slip with bad language.

From July 1, cussing at arts, cultural and entertainment events in the country will be banned.

Any new film containing obscene language won’t be granted a distribution certificate, so there’s no chance of seeing it at the cinema.

And copies of books, CDs or films containing swearing can only be distributed in a sealed package labeled “Contains obscene language,” a Kremlin statement said.

The directive from Moscow added the legislation “bans the use of obscene language when ensuring the rights of Russian citizens to the use of the state language, and protecting and developing language culture.”

Where disputes arise, a panel of experts will decide what counts as a swear word.

The law harks back to the Soviet era, when the Communist Party required artists and writers to avoid “decadent” Western fashions and to stick to traditional values.

Opponents have criticised the move as a thinly-veiled attempt by Putin to limit freedom of expression and promote a conservative, nationalist viewpoint.

A report by rights group Amnesty International in January highlighted a denial of “basic freedoms” in Russia, which last year introduced a law barring anyone from talking positively about homosexuality in earshot of minors.

It is not clear whether the ban on swearing will also extend to Russian users of international social media such as Twitter and Facebook.