Home National News Odd News See The 16-Year-Old Who Did Not Grow Longer Than 30 Inches Due...
Facebook
Twitter
WhatsApp 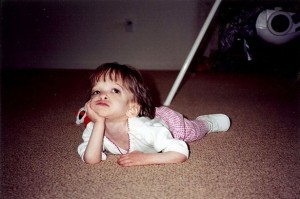 Most parents worry about the same things with their teenage children – such as good grades and staying out of trouble – but such typical concerns were not afforded for the Greenberg family of Maryland in the United States.

In 1993, they welcomed their third daughter, Brooke, into the world and were happily raising her until they realised that she had not grown in four months.

Brooke suffered from a condition so rare that doctor’s have simply named it Syndrome X because so little is known about it.

Syndrome X halts the ageing process, preventing Brooke from growing any larger than a small baby.

Throughout her life, the tiny teenager never weighed more than 17lbs or grew longer than 30 inches.

The Greenberg family struggled to get answers from the medical community – who were completely baffled by Brooke’s unusual illness.

“I do feel sad when I see kids the same age as Brooke,” said mother Melanie in tonight’s Channel 5 documentary.

“When I see where they are and what they’re doing every day.”

While Brooke defied the lifespan given to her by most experts the family consulted, she passed away last year at the age of 20.

“We just want to go on and live our lives,” adds dad Howard.

“And remember our daughter.”

Despite her sad passing, the infant’s unique DNA has potentially given Florida microbiologists a breakthrough insight into the study of Syndrome X which could allow the development of future treatment for the condition.

Drawing on a collection of family videos and photographs kept by the Greenberg family, the Channel 5 film will follow the incredible story of tiny Brooke during her teenage years, as her family continues to search for help.