See the Brazilian Village Where People Melt Away under the Sun 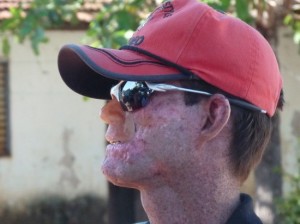 The village of Araras, in the state of Sao Paulo, Brazil, has the world’s largest population of people suffering from a rare skin disease known as xeroderma pigmentosum (XP). The condition is hereditary and makes its victims extremely sensitive to the sun’s ultraviolet rays. People suffering from XP become highly susceptible to skin cancer and are unable to repair the damage caused by the sun, leaving their skin red, raw and unsightly.

Since Araras is mostly made up of tropical farming communities, outdoor work is inevitable. Most residents have no choice but to spend long hours out in the sun, letting XP take over their lives in the most horrifying ways. Out of the 800 residents, over 20 people suffer from the condition. That’s one in 40 people, far higher than the United States, where the rate of occurrence is one in 1 million. One of the reasons for this is that Araras was founded by only a few families with several carriers of the disease, who passed it on as the villagers intermarried.

38-year-old Djalma Antonio Jardim has been an XP victim for several years. “I was always exposed to the sun – working, planting, and harvesting rice and caring for the cows,” he said. “As the years passed, my condition got worse.” For Jardim, XP showed early signs of manifestation. When he was just nine years old, he developed an unusually large number of freckles and small lumps on his face. If he had had the opportunity to protect himself from the sun back then, things could have been very different today.

But that wasn’t the case, and XP has eaten away the skin on Jardim’s lips, nose, cheeks and eyes. He now wears a rudimentary orange mask to conceal the damage, and a large straw hat to preserve whatever little is left of his face. Over the years, he has gone through over 50 surgeries to remove the tumors. The hat now helps him a little in controlling the disease.

But XP doesn’t just stop at the skin. About one in five patients also suffer from spastic muscles, deafness, poor coordination or developmental delays. And the worst part is that for a long time, the disease went undiagnosed in Araras. Nobody could tell Jardim or the others what was happening to them. “The doctors I went to said I had a blood disorder,” said Jardim. “Others said I had a skin problem. But no one said I had a genetic disease. It was only in 2010 that my disease was properly diagnosed.” It turned out that both of Jardim’s parents were carriers of the defective gene.

77-year-old Jose Claudio Machado, and his 11-year-old grandson Alisson, both suffer from the disease. While Jose’s condition is quite advanced, he’s making sure his grandson doesn’t repeat the same mistakes. 80-year-old Joao Goncalves da Silva and his wife Geraldina Aleixo, 75, also have XP. They don’t go anywhere without their hats and umbrellas to protect them from the sun. Gleice Francisca Machado, a local teacher, has an 11-year-old son suffering from XP. She studied the area’s history in detail and found cases of XP going back at least a 100 years.

Gleice has started an association that educates locals about XP, especially early prevention in children with or with external symptoms. Now that the villagers are gaining awareness about XP, they’re trying to be more careful about sun exposure. They’ve invented special devices like cardboard bicycle roofs to help keep the children safe. They also make sure to wear long sleeves, and prefer to go out only at night if they can manage it. “The sun is our biggest enemy and those affected must change day for night in order to live longer,” said Gleice. “Unfortunately, that’s not possible.”