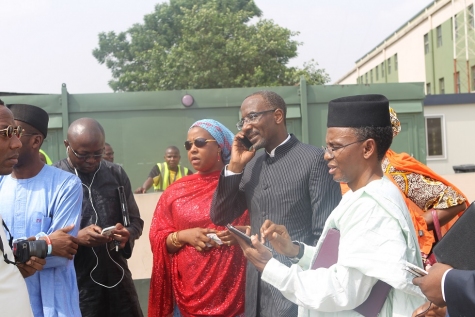 Despite being shown a valid court order, security personnel at the weekend prevented suspended Governor of the Central Bank of Nigeria (CBN), Malam Sanusi Lamido Sanusi from traveling abroad.

Recall that a Federal High Court sitting in Lagos had described as illegal and unconstitutional, Sanusi’s arrest by the Department of State Security (DSS) at the Murtala Mohammed International Airport (MMIA) Lagos, after he was suspended from office by President Goodluck Jonathan. The court ordered the return of his passport and directed the Federal Government, acting through any of its agencies or officials, against abusing Sanusi’s fundamental human rights to freedom of movement.

However, that order was flagrantly disregarded by the security men as they seized Sanusi’s passport again at the weekend, citing orders from the presidency.

Information Nigeria reports that the suspended CBN governor was stopped at the Malam Aminu Kano International Airport, in Kano on his way to France enroute Mecca, Saudi Arabia to perform the lesser Hajj.

This development has elicited the response of his close friend and ex-FCT Minister, Malam Nasir El-Rufai, who expressed anger, helplessness and shame at what he termed government’s “sheer brainlessness”.

He said: “My brother Sanusi Lamido Sanusi (SLS) has just been stopped at Kano Airport and prevented from travelling to Saudi Arabia for Lesser Hajj, violating his freedom of movement, religion and conscience.

“These Jonathanians have no respect for the laws of the country and court judgment, yet they expect citizens to respect them and take them seriously.

“They have failed to provide basic security. They dance and party when citizens are being bombed to death and our daughters being abducted by Boko Haram. They then insult our sensibilities by questioning whether over 200 girls have ever been kidnapped from Chibok, and then form a committee in search of someone to blame.

“They are cowards who run into hiding with the hint of the slightest danger to their bodies or bank accounts. They block public roads they did not build to protect themselves and care less about the safety of the Nigerian citizen, but are quick to violate the rights of unarmed and law abiding citizens like SLS because he exposed them.

“We hope that SLS’ lawyers will go back to the High Court and procure the arrest of those behind this latest violation of the ruling of the court”.