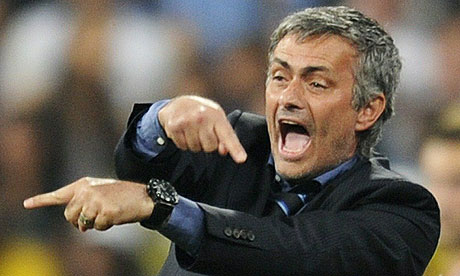 Arsène Wenger was probably not expecting to be called a quite abhorrent name by his standards, when he taunted Jose Mourinho about being afraid to lose last season’s title.

All that was justified when Chelsea thumped Arsenal by an aberrant score-line. Fine Mourinho was probably right, Wenger has brought no trophy to his current club for nine seasons now. Fine Chelsea finished ahead of the gunners in the Barclays Premier League final standings. However, those words might actually bite him as the blues failed to land a trophy this season, Mourinho’s second season without a trophy.

And it gets better. Arsenal take on Hull City in the Fa Cup final. They have a big chance not only to end their long-trophy drought, but also put the arrogant Mou in his place.

This is not the first time the former Madrid boss has resorted to name-calling; suggesting his tactics and football genius is superior to every coach, when his boring defensive pattern is coming under scrutiny by football fans.

While he was about to take over from Manuel Pellegrini at Madrid, Jose labeled the now Manchester City boss a ” Failure ” for finishing second behind Barcelona.

Its seems the Chelsea fans are so accustomed to Mou that his woes are accepted and celebrated.

When Benitez was incharge for that short spell, Stamford Bridge was living hell for him. Away from home was no different. Fans chanted their dismay of his appointment, due to some silly old football incidents.

Despite his brief spell, he forked out a Europa League trophy for Chelsea, whereas an appreciated demi-god as Mourinho couldn’t guarantee a winners medal.

A veteran as Ashley Cole was dropped from the England squad touring Brazil for the World Cup. Fans alike in a typical fashion ( Including Chelsea fans ) took to social networks to express their anger for his snub.

I find it quite disturbing that the same Chelsea supporters blasting Roy Hodgson for his decision to drop the 107 capped left back, had no similar words when Mou opted to use César Azpilicueta over Cole at Chelsea.

In football, the more you play the better your chances of getting picked for the National team- Azpilicueta got game time under his belt and was included in the Spanish provisional squad for the World Cup, Cole did not and is left out for England.

Saturday is a significant day in football.

Wenger has a big opportunity to end that torturing years without a trophy. If he succeeds, fair enough to Arsenal. Whilst Jose Mourinho might want to rethink who he called a specialist in failure afterwards.