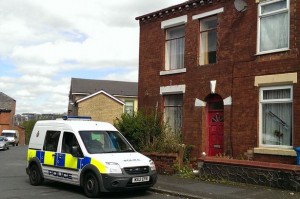 A man has been arrested after his 96-year-old mother’s body was allegedly left in the family home for up to a year.

Cops found the body of Dena Petryszyn after being called out to a house in Oldham by worried neighbours.

The Italian-born widow who lived with son Michael had not been seen by neighbours for months.

Police and social services who called at the three-bedroom terrace on Wednesday made the grim discovery.

Michael, aged in his early sixties, was arrested on suspicion of failing to declare the death and later bailed. Police say they do not believe the death was suspicious.

Residents described Ms Petryszyn as a friendly and pleasant neighbour who had lived in the area for over 40 years.

Dena’s husband is believed to have died in the 1980s and she did nor have other children or close family.

Concerned Nargis Ali, 33, a student nurse, said: “This is a street where people do talk to each other. When we all talked we realised that something was wrong.”

“I don’t think she worked. She was a housewife and I think her husband was from Ukraine. He died several years ago, so it was just her and Michael. I don’t believe there was any other family.”

The post master at the local post office, said: “She was a nice lady. She had been coming here for 25 years but we hadn’t seen her for a couple of years. It’s very sad.”

This morning a police car remained outside the entrance to the badly-maintained property.

Earlier in the week, officers and council staff were seen removing bags of rubbish from the home.

A GMP spokesman said: “A man was arrested on suspicion of failure to notify death, he has been bailed pending further enquiries.

“Enquiries are ongoing to establish the cause of death, but at this stage in the investigation there do not appear to be any suspicious circumstances.”