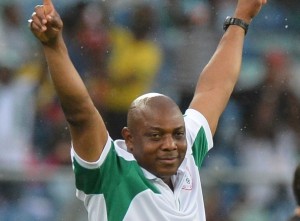 It’s more money for the trio as they make plans ahead of the much anticipated World cup.

I can categorically tell you that Pepsi has signed Super Eagles head coach Stephen Keshi, as well as assistant manager of the national football team Daniel Amokachi and Elderson Echiéjilé as its new ambassadors.

Osaze Odemwingie who is also an ambassador was scheduled to attend but canceled to spend time with his wife and new son.