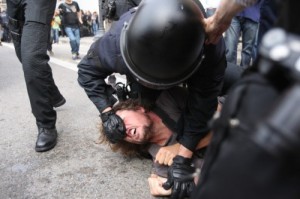 A University of New Mexico law student lost a testicle after scuffling with an officer earlier this month, and now there’s video evidence of the melee.

Progress Now released court documents and a video of the DWI arrest earlier this month. Footage shows Albuquerque officer Pablo Padilla appear to knee 24-year-old Jeremy Martin in the groin. The four-and-a-half minute video, which was filmed by Padilla, also appears to show Martin refusing multiple demands to sit down or stop talking.

He was initially pulled over for running a stop sign on campus. Padilla asks him to get out of the car and sit on the curb, which he does. But when Martin gets up and approaches Padilla, a verbal and then physical altercation begins.

Martin says that doctors removed one of his testicles after the groin kick he sustained.

KOB transcribed some of the dialogue in the video:

Progress Now told HuffPost Crime that officer Padilla has been placed on administrative leave pending an internal investigation. Its executive director, Patrick Davis, was upset by the video.

“Instead of asking for backup or using less physical compliance techniques, the officer puts away his tools and overwhelms an young intoxicated man with such force in a most sensitive area that he causes the man to, understandably, respond even more strongly,” Davis said in a press release.