A suspected ritualist identified simply as Ihenacho was almost lynched over the weekend at Iyana Iba market in Lagos for allegedly kidnapping three children. 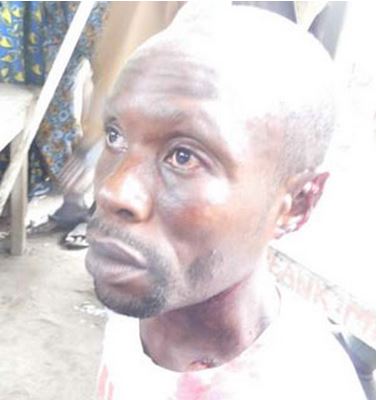 The suspect who claimed to be a security man at Alaba International Market had reportedly deceived the three siblings aged four, six and seven years old that he wanted to buy biscuits for them.

According to the mother of the children, Mrs. Iyabo Lawal, she had noticed the man when he passed the first time, unknown to her that he was monitoring her kids who were playing with her mother in her shop. She didn’t notice when her children followed the strange man as she was attending to customers and she thought they were playing with their grandmother.

Some people who saw the man with the children at the end of Iyana Iba road confronted him, asking what he was doing with the children but he couldn’t give a satisfactory answer. That’s when they raised an alarm and people gathered, pounced on the man and started beating him but for the intervention of mobile policemen attached to CTU Base 2, Anti Terrorism, Ikeja, the mob would have lynched him.

Ihenacho was later handed over to policemen from Ojo Police Division.