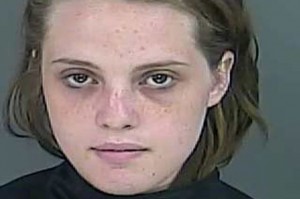 A teenage girl has been charged with involuntary manslaughter after allegedly shooting dead a friend who asked her to test out a bullet proof vest.

Taylor Kelly, 18, is alleged to have shot at 26-year-old Blake Wardell’s flak jacket, but it either went through the lining or missed the jacket altogether and struck him in the heart, killing him.

Police were called to a house in Anderson County, South Carolina, following the shooting.

Friends performed CPR and paramedics were called to the garage of the home but Wardell was pronounced dead at the scene.

Medical tests found no evidence of heavy alcohol or drugs were discovered and bond was set for $10,000, according to Fox Carolina .

It is believed there was a group of around 10 friends at the incident and a coroner’s report ruled that Wardell bled to death.

His parents said on Facebook: ‘You took the truth with you ill never know what happen but when i got there i hope you heard me when i said i lopve [sic] u. i do,’ he wrote.”