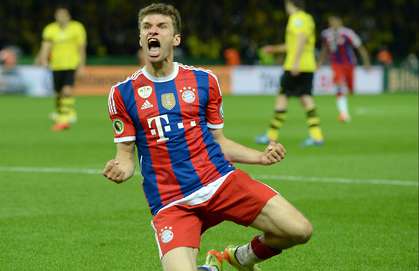 Manchester United have suffered a blow in their pursuit of Bayern Munich forward Thomas Muller after he confirmed that he’d like to remain with the Bavarian giants next season.

Louis van Gaal was announced as the permanent replacement for David Moyes this week, and although he won’t officially take over until after the World Cup, work has already begun on remodelling his squad.

Manchester United have been linked with numerous players after reportedly handing Van Gaal a £150 million transfer budget – and many of those players come from his former club Bayern Munich.

Although they appear close to a deal for Toni Kroos, the 2013 champions are unlikely to pull of a double swoop including Muller, after he insisted that he was happy to remain in Germany.

he told Sport Bild. “I am under contract at Bayern until 2017.

“We have just won the domestic Double and now I am looking forward to the World Cup. I have the feeling that I will play an important role at FC Bayern — and I 100 percent identify with the club and the people around the club. That’s a fact.”

He added: “I enjoy playing for Bayern — actually, there is nothing nicer.”

While they are unlikely to land Muller, reports continue to claim that Manchester United are close to
a big-money deal for Southampton youngster Luke Shaw.

Edinson Cavani – another Manchester United target – has already insisted he has no plans to leave Paris Saint-Germain, while Bacary Sagna is set to join Manchester City.{GMS}