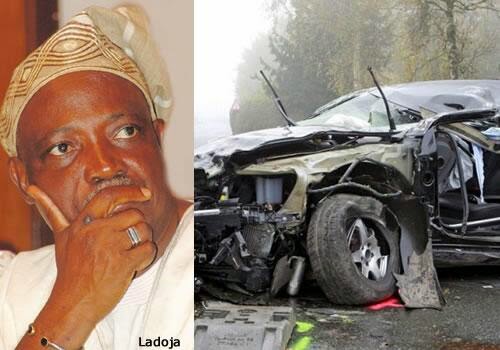 One of the son’s of former Governor of Oyo State, Senator Rasheed Ladoja, simply known as Adebola Ladoja, died Thursday, 29th of May, 2014 in a ghastly motor accident on the Eko Bridge,Lagos.

top speed,and lost control of his vehicle, ramming into the median of the bridge, before crashing into the deceased’s car.An eye witness said “It took several hours before the victim could be rescued from the wreckage of the vehicle. He was trapped behind the wheels with blood gushing out of his head.”The Lagos State Police spokesperson, Ngozi Braide said:

“At about 3.30pm on the Eko Bridge, Lagos Island, a Daf truck with number plate, JJJ 59 XA, driven by one Justice Oseghai, ran into a Volkswagen Golf saloon car, marked, AKD 107 CJ, driven by one Adebola Ladoja, the son of a former governor of Oyo State, Senator Rasheed Ladoja.The victim died on the spot. The corpse has been removed to the Lagos Island General Hospitalmortuary for autopsy while the truck driver has been arrested.”

May His Soul Rest In Peace!