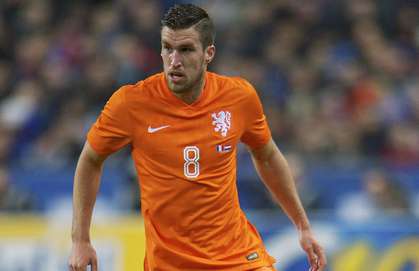 Louis van Gaal has been confirmed as Manchester United manager, and the first message in his inbox will be one of grave disappointment.

Manchester United reportedly launched a £25m bid for Kevin Strootman on the advice of Van Gaal last week but, according to Il Tiempo, that bid has been
rejected out of hand by AS Roma.

The Netherlands head coach will take charge at Old Trafford after the World Cup and will immediately set about the task of rebuilding what appears to be a
fragile Manchester United team.

The Glazer family are prepared to let Van Gaal blow as much as £200m in the transfer market this summer and it seems the former Barcelona and Bayern Munich manager is keen to bring the best of Dutch talent.

One player believed to be near the top of Van Gaal’s wishlist was midfield enforcer Strootman, who enjoyed a fruitful debut season in Serie A before
suffering cruciate ligament damage.

He will miss the World Cup, but Van Gaal wanted to make sure that Strootman was a Manchester United player when he arrived at Old Trafford in late July.

But AS Roma are building an ambitious
project and Rudi Garcia has his eyes on the Serie A title as well as an assault on the Champions League next season.

The club are therefore very keen to hold on to their star players and have already offered Miralem Pjanić a pay rise, and subsequent contract extension.

They will also try their best to keep Mehdi Benatia, who has been linked with Manchester United, rivals City and Chelsea.{GMS}