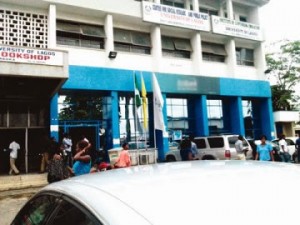 A pretty  Unilag student by name — Olayemi Victoria is laying strong allegations on the NIPOST office, Unilag branch.
She is accusing them of stealing her diamond engagement ring and Blackberry Z10 sent to her by her fiancé in the US.
Olayemi said a Diamond ring, Blackberry Z10, PS, chocolate bar and magazines were all in the package, but the Diamond ring and Z10 were missing when she received the package She said she immediately returned it back and made a complaint asking them to return what they took form the package but one of the officials threatened to beat her up.
After speaking to her fiancé, she made a report at the Sabo Police Station, but little or nothing was done.
The lady was later directed to NIPOST’s Somolu district when the lady insisted on having her stolen items back.
The diamond ring belongs to her, but the Z10 was for her fiancé’s brother, she said.