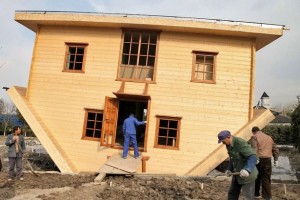 An $800,000 upside-down house in China has finally opened its doors to the public after Shanghai officials declared that it is up to code and meets all the city’s safety regulations.

The house, which has its inverted furniture stuck to what is now the ceiling, also has a sloping floor to further enhance the disorienting experience.

“I’ve felt a little dizzy since I came in. everything has been turned upside down. It’s pretty interesting. But I think the real reason I feel dizzy is that the floor is sloping. That’s why I feel dizzy,” visitor Huang Qi told the Voice of Russia.

Similar houses have previously been built in Russia, Germany and Austria. 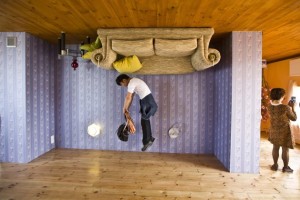 Town officials have imposed an occupancy limit on the home in the interest of public safety. Tourist Sun Mingjiao was lucky enough to get in.

“The little toilet in the bathroom made the biggest impression on me. I think its design is pretty innovative,” Mingjiao said. “Normal people may not think about it this way, but when I took a look at it inside, I had the feeling that water might fall out of it. It made me feel really odd.” 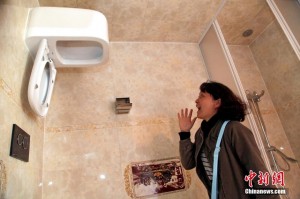