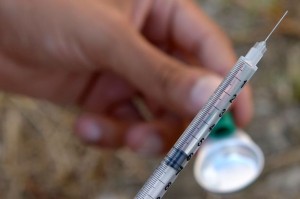 Elderly lab mice did much better at memory and learning tasks after repeated blood transfusions from three-month old mice.

Dr Tony Wyss-Coray of Stanford University in the USA told the journal Nature Medicine that the improvements were so marked that “future studies are warranted in aged humans”.

He said the research pointed towards “a successful strategy to combat the effects of ageing”.

The researchers believe young blood may contain natural chemicals that turn back the clock to rejuvenate the ageing brain.

The “vampire therapy” improved the performance of the elderly mice in memory and learning tasks.

Structural, molecular and functional changes were also seen in their brains.

Evidence was seen of new connections forming in the hippocampus, a brain region vital to memory and sensitive to ageing.

Dendritic spines – finger-like extensions from the branches of neurons that are thought to play a role in memory formation – also became more dense.

Ageing mice given eight infusions of young blood over three weeks improved their performance in mental tests of fear condition and locating a hidden platform in a water maze.

Infusions of blood from other elderly mice had no effect.

What caused the changes is still unknown, but it appears to involve activation of a protein called Creb in the hippocampus that helps regulate certain genes.

“These two possibilities are not mutually exclusive, warrant further investigation, and may each provide a successful strategy to combat the effects of ageing.”

“Although the treatments tested here rejuvenate certain aspects of learning and memory in mice, these studies are of unknown significance to humans. This research, while very interesting, does not investigate the type of cognitive impairment that is seen in Alzheimer’s disease, which is not an inevitable consequence of ageing.”