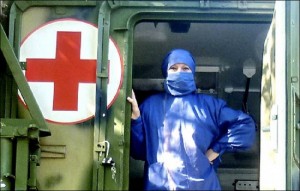 Residents of the almost abandoned Soviet town of Krasnogorsk and the areas around Kalachi village, in Kazakhstan, are prone to a mysterious ‘sleeping beauty’ syndrome. The bizarre condition has people suddenly dozing off for as long as six days at a time. It’s like a bad horror film – the illness has gripped these regions and no one knows the reason behind it. Scientists and experts are truly perplexed by the phenomenon.

The weird sleeping illness isn’t prevalent all the time. Instead, it comes in waves – the first one occurred in March 2013 and the second in May 2013. There have been three more since then – around New Year 2014, just after the winter holidays this year, and now again in May. A total of 40 to 60 people have suffered in the scarcely populated region. In most of the cases, the sleep is accompanied by temporary memory loss.

One of the first victims of the syndrome was Maria Felk, a 50-year-old milkmaid from Kalachi. “I was milking cows, as usual, early in the morning, and fell asleep,” she said. “I remember nothing at all. Only that when I came around, I was in the hospital ward. The nurses smiled at me and said, ‘Welcome back sleeping princess, you’ve finally woken up.’ What else do I remember? Nothing. I slept for two days and two nights. The women in my ward said that I tried to wake up several times, saying I urgently needed to milk my cows.”

Interestingly, the strange disease is not limited to locals. It extends to visitors as well, like 30-year-old Alexey Gom, who was visiting his mother-in-law in Kalachi. “I came with my wife to visit my mother-in-law,” he said. “In the morning I wanted to finish my work. I switched on my laptop, opened the pages that I needed to finish reading – and that was it. It felt like somebody pressed a button to switch me off.”

“I woke up in the hospital, with my wife and mother-in-law by my bedside. The doctor found nothing wrong with me after a series of tests he performed. I slept for more than 30 hours. But it never happened to me before, never in my life, or to anyone from my family,” said Alexey.

I’d say Alexey and Maria were actually lucky. There have been reports of people falling asleep for almost a week. And it is rumored that one man might have been mistaken to be dead and buried alive! Some people have had repeated episodes, like Lyubov Belkova, a clothes seller at the local market. She has been a victim of sleep no less than seven times. Her daughter suffered twice, and her 15-year-old granddaughter, once. And her co-workers at the market have all fallen asleep at different times as well.

It’s quite baffling that some families are repeatedly affected, while others seem completely immune to the illness. The only common factor – it seems to happen mainly to ethnic Russians and Germans. There’s no knowing when the disease will strike, so the villagers always have a packed bag at hand, in case they need to be rushed to the hospital.

When the first epidemic occurred in 2013, doctors thought it was a case of bad quality vodka. But it turned out that none of the six people who fell asleep back then had consumed any alcohol. Some locals believe that the problem crops up after a sudden rise in the atmospheric temperature. Another theory suggests that water from a nearby unused Uranium mine is seeping into the local rivers, and being consumed by locals.

Several scientists have visited the remote backwater region, seeking explanations for the sleep epidemic. They conducted about 7,000 experiments on the area’s soil and water, on the victims’ blood samples, hair and nails. They discounted underground gas and local cell phone signals. They tested homes for the presence of radon gas, high radiation levels, heavy metal salts, bacteria and viruses. All the tests proved inconclusive.

At one point, Krasnogorsk was a secret town run directly by Moscow, with 6,500 residents who worked on the Uranium mine. Their life was quite prosperous, but things changed drastically after the Soviet breakup. Only 130 people remain in Krasnogorsk and Kalachi has a population of 680. They mostly live with scarce supplies and not even the heating works properly in the winter.

According to Doctor Kabdrashit Almagambetov, at the district capital of Esil, “When a patient wakes up, he will remember nothing. The story is one and the same each time – weakness, slow reactions, then fast sleep.” One of his patients, Alexander Pavlyuchenko, fell into a long slumber while visiting the local cemetery. When he finally woke up, he insisted that he had been on a fishing expedition all along.

“Sadly, the nature of the condition is still not known,” said Dr. Kabdrashit. “We have excluded infections, we checked blood and spine liquid, nothing is there. We categorized it as toxic encephalopathy, but ‘toxic’ is just a guess here, and encephalopathy is just the title of the set of brain diseases.”

A couple of children who also suffered the sleep epidemic were affected by hallucinations as well. Misha Plyukhin, one of the kids, said he saw light bulbs and horses flying around him, and then saw his mother with eight eyes and a trunk. Then he felt snakes and worms in his bed, eating his arms. Rudolf Boyarinos, the other kid, doesn’t remember much. But he did yell ‘monsters!’ a lot when he was out cold. The two boys are back in school now but are finding it difficult to cope.

Leonid Rikhvanov, a professor of geo-ecology and geo-chemistry at Tomsk Polytechnical University, has some good news to offer. Along with his team, he studied the samples of uranium that a resident of Kalachi sent him. “We tested the samples and came to the conclusion that Radon gas is the reason, but it is not because of radioactive Radon. It comes from the chemical effect of the gas. In other words, the disease is caused by evaporation from the mine,” he said. However, more tests are needed to confirm this theory.

But is Radon really the true cause?  Dr. Kabdrashit, who is an anaesthesiologist himself, said that he uses similar gases and patients wake up an hour or two after surgery. “These people sleep for two to six days, what is the concentration of this gas then? And why does one person fall asleep and somebody who lives with him does not?”

Unfortunately, there are no answers to this question and more. Nurlan Kapparov, Kazakhstan’s Environmental Protection and Water Resources minister has pledged to discover the cause of the outbreak. Let’s hope the mystery is solved soon.