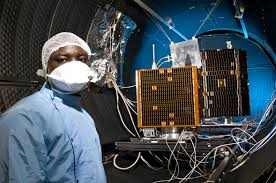 The National Space Research and Development Agency (NASRDA) has disclosed that satellite images from the Nigeria SatX and Sat 2 cannot locate the 273 school girls abducted by Boko Haram insurgents in Chibok, Borno State as they were not built for such purposes.

The Director General of the agency, Professor Seidu Mohammed, who made this known in a chat with Daily Trust yesterday, explained that while many Nigerians were expecting the satellite to do what he called wonders in tracing the abducted school girls, the country’s satellites only possessed 2.5 meters resolution, not sufficient to do such tracking.

Mohammed claimed that even countries with advanced satellite imagery as high as three meters resolutions, find it difficult to trace terrorists, saying they only help in providing useful information on the possible locations of the hidden terrorists.

Insisting that Nigeria Sat X and Sat 2 are working perfectly, the NASRDA boss argued that what they have are 2.5 meter resolutions, meaning that they don’t have the capacity to trace individuals’ movement but only give maps of some locations at some particular times.

“People thought satellites are video cameras. They are not. Satellite moves from one location to another and some times before they come back to a particular spot it takes up to four days.

“An earth observation satellite is not a video machine that can capture people anywhere therefore cannot track a migrant militants who are moving every 15 minutes or so.

“That is why America with hundreds of active satellite can’t be able to track Taliban and other militants but that is not to say it has no relevant, it has in updating maps to know how many routes are available for terrorist to escape”, he said.

Mohammed, however, added that the agency was working with relevant authorities in providing credible information in the efforts to rescue the schools girls.