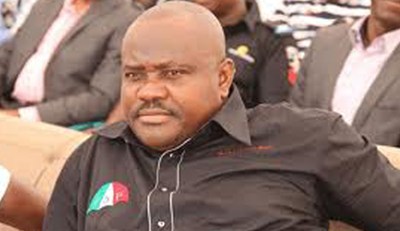 Ahead of the 2015 general elections, the Rivers State chapter of Peoples Democratic Party, PDP, has said that the Supervising Minister of Education, Chief Nyesom Wike, was the most qualified candidate to view for the governorship polls in the state.

It is widely believed that Wike is the Presidency’s most preferred choice to fly PDP’s flag in the Rivers guber polls and the minister too has not hidden his desire to succeed his former boss turned political rival, Gov. Rotimi Amaechi.

However, Wike’s perceived interest in the governorship race has thrown up a heated debate in the state as there are agitations for the next governor of the state to come from any of the senatorial districts which have not occupied the position before. Wike is an Ikwerre man just like the incumbent, who would have ruled for eight years by May, 2015.

But Chairman of Rivers PDP, Chief Felix Obuah, warned that nobody should threaten any PDP member for showing interest in any elective position in the state.

Obuah spoke on Thursday in Ogba/Egbema/Ndoni Local Government Area during the inauguration of PDP unit executive members, the unit executive of the Grassroots Development Initiative and the celebration of the party’s victory at the Appeal Court in Abuja.

The PDP chairman argued that the minister had done a lot as a leader for the growth of the party in Rivers and deserved the support of the people of the state.

He said, “I assure our great leader, Barrister Nyesom Wike that his leadership is not in any way comparable to that of any person in the state. We want to assure him that any day, anytime; we will continue to respect his leadership.

“We are assuring him that just like any other candidate that has interest to contest the governorship of the state, if he (Wike) is interested to contest for any position in this state, he should not be afraid; he should come out. He has done enough and deserves the people’s support.

“Let nobody threaten any PDP member. If you are interested, come out. I must sincerely say that apart from God Almighty, we owe this Appeal Court victory to our mentor, our financier, our leader, Nyesom Wike. We will join hands together to make sure that Rivers State is delivered to PDP and PDP alone”.

Obuah declared that those planning to frustrate the government of President Goodluck Jonathan would fail, just as he appealed to the abductors of the Chibok school girls to release them.

Calling on Boko Haram and its sponsors to release the Chibok girls, Obuah described the children as innocent and did not deserve to continue to be held captive by the sect.

Earlier, one of the stakeholders of the PDP in the state, Chief Emma Anyanwu, challenged the ruling All Progressives Congress, APC, in Rivers to present a candidate that could match Wike in any election.

“The victory we got at the court on Wednesday shows strength. Our enemies said the Appeal Court will stop the Obuah-led executive of the state PDP, but the latest development has shown that the Appeal Court did not stop us.

“I know the person they (APC) want to present (as governor). I am inside them (APC) and that is politics. I challenge the APC to present a candidate that will match Nyesom Wike.

“He (Wike) has earned his recognition with hard work and what we owe him is to give him all the necessary support”, Anyanwu added.