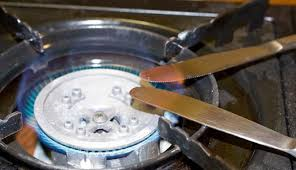 A 29-year-old woman, Lucy Samuel, on Thursday, appeared before a Yaba Magistrate’s Court, Lagos, for allegedly assaulting her 13-year-old step-daughter with a hot knife.

The accused, who resides at No. 14/6, Isheri Osun Road, Bucknor, Ejigbo, a suburb of Lagos, is charged with a two-count charge of conspiracy and assault.

The prosecutor, Inspector Gbemileke Agoi, told the court that the accused and her husband conspired and assaulted the 13-year-old with a hot knife on April 6, at No. 14/6, Isheri Osun Road, Bucknor, Ejigbo.

Agoi said that the accused inserted the knife into the victim’s private parts and buttocks after the girl had confided in her that her father (the husband of the accused) usually forced her to have sex with him in her absence.

Agoi explained that the complainant, who is also the teacher of the victim, Mrs Abimbola Owolabi, who observed that the girl was usually uncomfortable in class, discovered the wounds.

The prosecutor noted that the offences contravened the provisions of Sections 243 and 409 of the Criminal Law of Lagos State, 2011.

The chief magistrate, Mrs Kikelomo Ayeye, admitted the accused to a bail of N100, 000 with two sureties in like sum and adjourned the case to June 13, 2014, for trial. (NAN)